Introduction: Hypospadias is one of the most common congenital deformities in the male urogenital system. Although there are more than 200 techniques for treating hypospadias, it is often difficult to repair severe forms using conventional methods. We present a method of combining buccal mucosa and fasciocutaneous penile flap for urethral reconstruction.

Material and methods: A 42 years old man underwent surgery due to failed hypospadias repair and lateral recurvation. Surgery was performed in permanent erection induced by prostaglandine E1, which enables easier dissection, precise correction of curvature and precise determination of appropriate length of grafts and flaps planned for urethral reconstruction. Remnants of scarred urethra were completely removed. Penis is completely straightened using Yachia technique. Fasciocutaneous flap was harvested with abundant and redundant vascularized subcutaneous tissue from dorsal penile skin. Buccal mucosa was grafted on the tunica albuginea between urethral meatus and the tip of the glans. Graft was quilted at the several points to the corporal bodies for better survival. Longitudinal vascularized skin flap was button-holed ventrally. The edges of the flap and buccal mucosa were sutured together to form the urethra. Glans wings were sutured to form the glans. The remaining penile skin was used to cover the penile body. 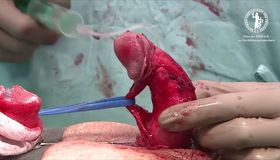 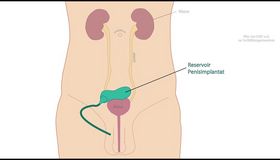 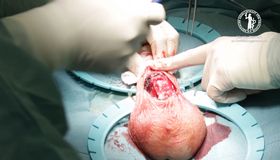