Laparoscopic endoscopic single site surgery (LESS) is an evolving approach to surgery that has been made possible by the development of single port systems and novel, flexible instruments. This video presents our approach to renal tumour nephrectomy with LESS. In addition to our standard laparoscopic instruments we use a 5mm high definition laparoscope (Olympus), a flexible reticulating grasping forceps (RealHand) and the four channel R-port (AdvancedSurgicalConcepts) inserted via a small peri-umbilical incision. The transperitoneal nephrectomy continues in the standard manner with reflection of the colon and dissection of the ureter. Early division of the ureter provides a point of retraction by the reticulating forceps when dissecting the hilum. The use of this reticulating forceps overcomes the lack of triangulation that arises with the use of a single port. As with a standard laparoscopic approach the pedicle is controlled with Hem-O-Lok clips and the angulating 12mm vascular GIA stapler can be introduced via the multiport to safely divide the renal vein. Final renal mobilisation is made possible by the retraction provided by the reticulating forceps. A 15mm Endo Catch bag is released from its introducer and placed via the 12mm multiport channel and the specimen is secured and extracted. Extension of the rectus fascia and skin incision is required for safe extraction of the specimen but results in a well-concealed peri-umbilical scar. Our early experience of LESS
nephrectomies is promising. Up to now we have performed four tumour nephrectomies with this technique and no oncological compromise. The mean operative time was 140 minutes and no complications occurred. LESS is feasible and safe with the development of the multiport and novel instruments in selected cases. 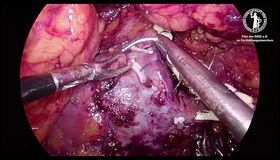 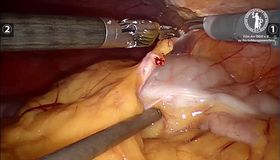 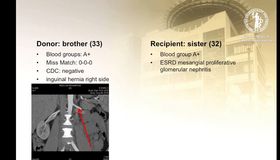